The 340B industry has undergone significant changes since HRSA’s 2010 Contract Pharmacy Guidance, which paved the way for the expansion of retail contract pharmacy networks as part of the 340B program. Although these changes have provided significant expansion opportunities for Covered Entities, the complexity, cost, and regulatory risk has increased, as well.

As a result of 340B program expansion, Covered Entities are increasingly focused on program oversight and ways to gain better control of the key processes that generate 340B savings for their organizations. The most significant responsibility of the Covered Entity is the determination of 340B eligible prescriptions to avoid the diversion of unqualified claims. Ultimately, the Covered Entity is solely responsible for compliance with 340B regulations established by HRSA; however, the process of 340B administration is commonly outsourced to one or more third party administrators (TPAs).  Increasingly, the work performed by TPAs has emerged as a distinct risk to Covered Entities due to disparate methodologies and capabilities across the industry.

Many Covered Entities struggle with the oversight of 340B processes they have outsourced to TPAs. The problem is compounded for Covered Entities employing multiple TPAs to gain access to pharmacies utilized by their patient population. To understand these challenges and the appropriate Covered Entity response, it is helpful to understand the evolution that has taken place in the industry since 2010.

Prior to 2010, the 340B industry was organized around in-house pharmacies. During this period, eligibility was largely determined at the pharmacy via 340B Rx pads or other manual processes controlled by the Covered Entity. Overall, Covered Entities managed to self-administer HRSA compliant programs because the number of 340B in-house pharmacies was limited and the technology requirements were minimal. In general, 340B programs prior to 2010 were oriented towards reducing drug purchasing costs, whereas today’s focus is on the development of significant growth in their 340B contract pharmacy programs. During this period, HRSA guidance did not allow development of retail contract pharmacy networks.

The 340B industry has undergone significant changes since HRSA’s 2010 Contract Pharmacy Guidance, which paved the way for the expansion of retail contract pharmacy networks as part of the 340B program. Although these changes have provided significant expansion opportunities for Covered Entities, the complexity, cost, and regulatory risk has increased, as well.

The need for TPA services grew in 2010, when HRSA’s Contract Pharmacy Guidance allowed for the establishment of retail contract pharmacy networks. This change permitted identification of 340B eligible claims after being dispensed from existing commercial inventory. Inventory management became more difficult as Covered Entities had to track 340B drug replenishment across multiple retail pharmacies based on processes not directly under their control. TPAs filled the technology need with virtual inventory management systems, which made it operationally feasible to establish large contract pharmacy networks that complied with the new regulatory framework.

Prior to 2014, TPAs offered Covered Entities proprietary virtual inventory management and replenishment solutions across the contract pharmacy networks they administered. Covered Entities primarily based their TPA selection on the pharmacy chains available through a particular TPA. With the exception of Walgreens, that opted to administer its stores, independent, regional, and national pharmacy chains performed 340B operations on a store-by-store basis, relying on TPAs to manage 340B replenishment. As 340B participation expanded, it became increasingly difficult for pharmacy chains to control their inventory processes, resulting in tactical responses that included:

Covered Entities faced a fragmented 340B market that required multiple TPAs to access the pharmacies needed to optimize their 340B networks. Additionally, 340B growth was limited, as pharmacy chains pursued enterprise-wide solutions for their inventory issues.

Since 2014, there has been a significant industry shift as the major national pharmacy chains responded strategically to their inventory challenges and mandated that Covered Entities use their internal 340B replenishment processes. The role of the TPA has evolved to provide additional services to both Covered Entities and pharmacy chains, including: 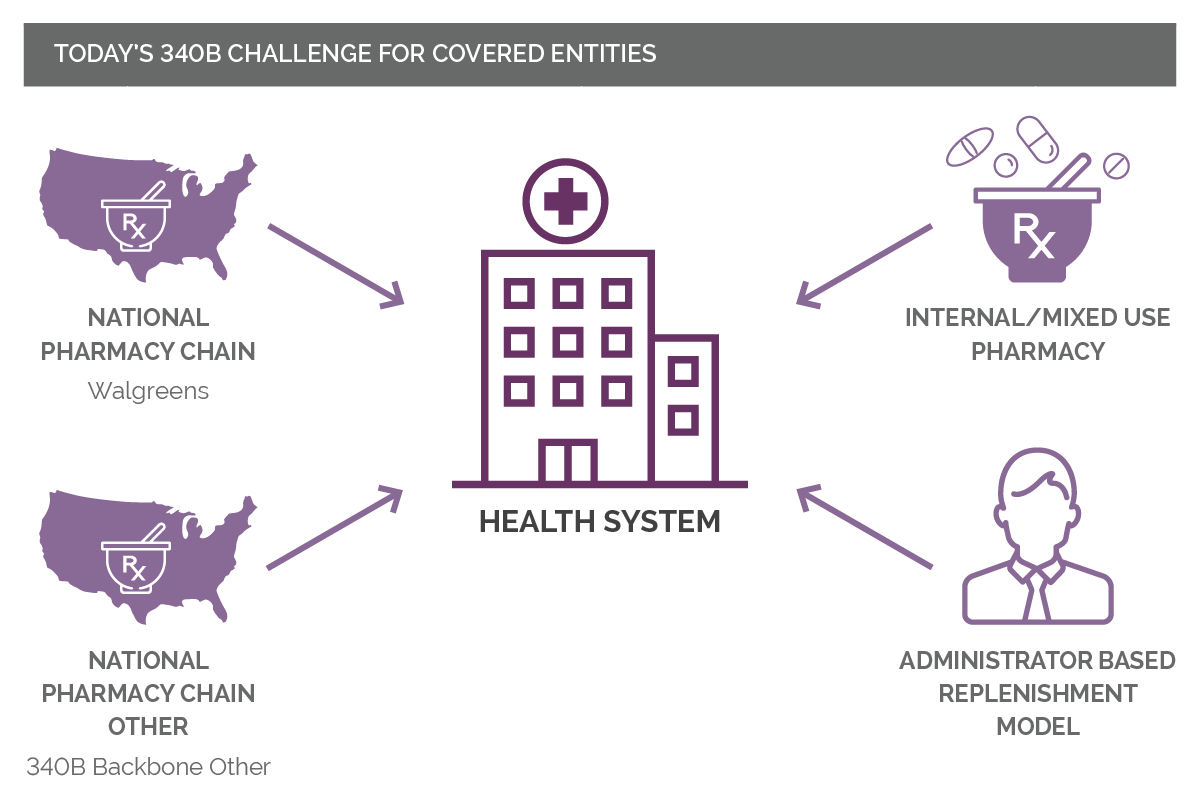 Wellpartner made the strategic decision in 2014 to focus on systems integration services for Covered Entities and to assist our clients rapid integration with all emerging “340B Backbone” models. In contrast, other major TPAs, including MacroHelix, Sentry Data Systems, and CaptureRx have positioned their services to support pharmacy chains in the implementation of “340B Backbones”, which effectively shifted their customer focus to pharmacy chains. In addition to the TPAs above, 340B Direct entered the market in 2014, offering both “340B Backbone” and TPA services.

Over the past two years, the complexity of program oversight has dramatically increased due to implementation of new “340B Backbone” models that have proven to be unwieldy for Covered Entities. Today, Covered Entities are faced with the prospect of managing multiple TPAs and authorizing additional organizations to access their 340B accounts for replenishment purposes. New responsibilities, including compliance audits and the reconciliation of multiple replenishment processes, are part of the complex 340B landscape that each Covered Entity must navigate to secure the future of its 340B program. In addition to administration concerns, costs have risen for Covered Entities as pharmacy chains increased their dispensing fees to achieve revenue and gross margin targets.

Adding to the list of challenges during this same period, HRSA oversight and audit activity increased and more rigorous audit methodologies emerged.

The evolution of the marketplace since 2014 has had some positive impacts for Covered Entities:

Today’s 340B challenge for Covered Entities is focused on safeguarding compliance in a complex environment of multiple TPAs and “340B Backbone” models. Technology capabilities play a paramount role in the management of multiple data interfaces, eligibility determination methods, and tracking 340B replenishment across multiple inventory models.

Business process controls spread across multiple vendors pose a significant risk to 340B programs. Without proper oversight, undetected data errors, variable TPA practices, and replenishment system issues have the potential to cause diversion, placing the entire 340B program in jeopardy. It is imperative that Covered Entities have their compliance processes in place prior to pursuing program expansion opportunities that still exist across the industry.

In 2017, pharmacy chains will support administration through all the major TPAs, providing an opportunity for Covered Entities to consolidate vendors, thereby simplifying their oversight process. This will allow Covered Entities to gain greater control and reduce risks related to both eligibility determination and 340B inventory reconciliation.

No longer will Covered Entities have to select a TPA based on exclusive access to a particular pharmacy chain. Since all the major pharmacy chains are now available through a standardized process and fee schedule, what was once a primary TPA selection criterion (pharmacy access) is now moot. Covered Entities can focus on narrowing down their 340B administrative relationships and evaluate which solution offers the best transparency and oversight for 340B Program compliance.

Technology capabilities and customer service offered by TPAs will be the primary selection criteria. TPAs offering the most flexible technology, reporting, and systems integration capabilities across the various “340B Backbone” models will be best suited to help Covered Entities meet the challenges in 2017 and beyond. Covered Entities will be able to establish streamlined 340B platforms that place them in greater control, allowing for 340B expansion with confidence that HRSA compliance is maintained.

In response to the challenges faced by Covered Entities, Wellpartner offers an enterprise 340B platform that provides a single point of control for 340B eligibility monitoring, inventory model integration, financial reconciliation, and reporting for all drug purchasing activity. 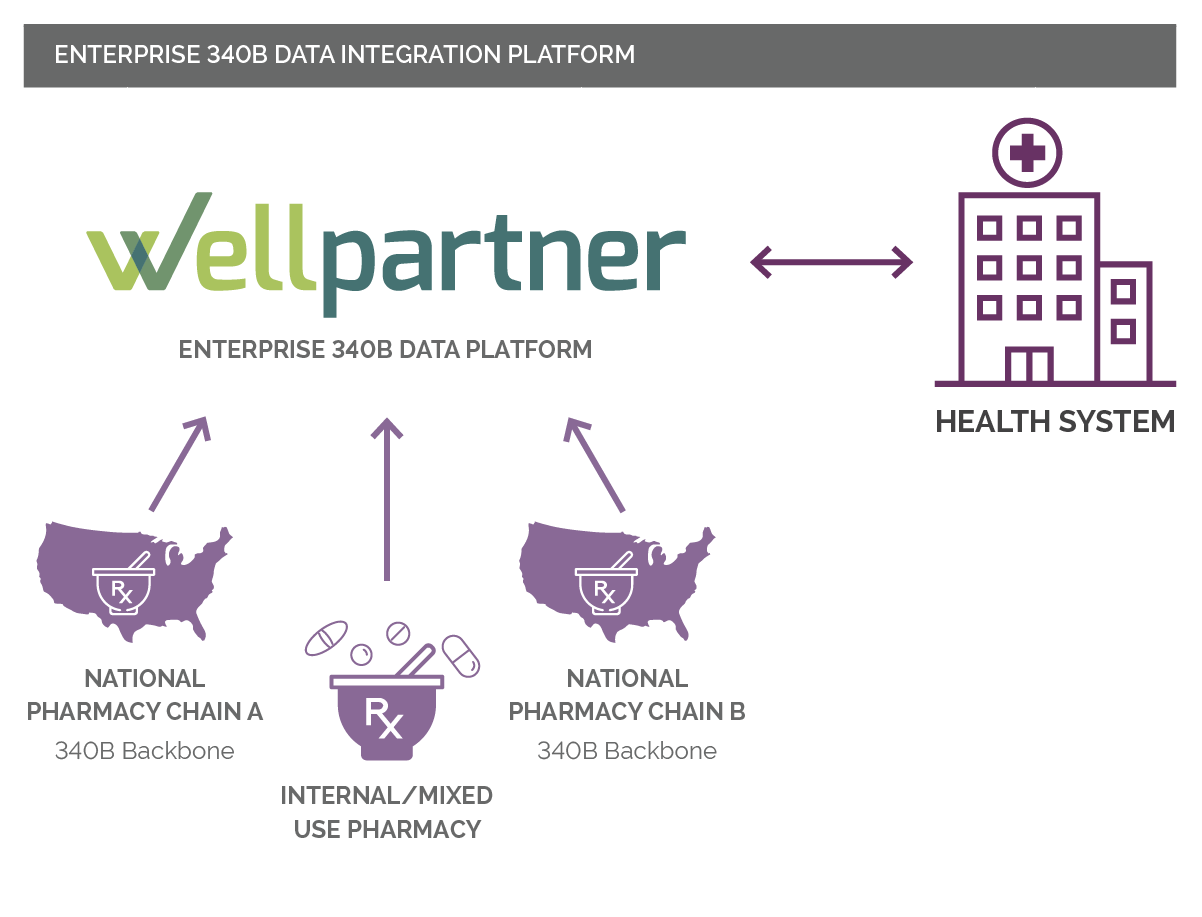 As TPA consolidation occurs, Covered Entities will be able to focus less on managing their vendors and more on managing their programs. Wellpartner’s service-oriented model employs all of the technology elements needed to maximize 340B savings, while maintaining the highest standards for HRSA compliance.

twitterfacebooklinkedinemail
Copyright ©2021 Wellpartner. All rights reserved
Back To Top
×