Now is time for all Covered Entities participating in the 340B Drug Pricing Program – the key stakeholders – to pay close attention to the November elections. Collectively, the White House, Senate and House of Representatives have the power to make legislative changes to the Program, as well as influence the responsible government agency, the Health Resources and Services Administration (HRSA), and its Office of Pharmacy Affairs (OPA).

Elevating the importance of the November elections, the White House Office of Management and Budget (OMB) reported online that it received 340B Program Omnibus Guidelines (“the Guidelines”) from HRSA on September 1. Whatever direction HRSA, with OMB input take the Guidelines there is potential for legislative actions. Should the Guidelines maintain the status quo or offer opportunities to expand the Program, it is logical to expect a legislative assault on the program fueled by the drug manufacturers stated dissatisfaction with the Program. Should the Guidelines cause the program to contract, Covered Entities and their 340B partners will need to actively engage both the Senate and the House of Representatives to get the legislation needed to optimize the Program.

With respect to the Federal regulations, including the Guidelines, OMB’s core mission is to serve and implement the President’s vision across the Executive Branch. To accomplish this, OMB evaluates the economic and broader potential impacts of regulations, as part of the regulatory decision-making process. Typically, OMB reviews result in either approving the proposed rules, in which case they are published in the Federal Register and become effective; or sending them back to the agency that promulgated them, for further consideration. Reviews are normally completed in 90 days. If OMB follows its normal course, and does not ask HRSA to make any major changes, the Guidelines should be released in the late November/early December time-frame, after the elections.

Separately, we note that there is already one Congressman, Christopher Collins (R-NY), who serves on the House of Representatives Energy and Commerce Committee’s health sub-committee, who is on record stating that 340B legislation could surface in early 2017. At an August industry conference, Congressman Collins suggested that reforms to the Program could parallel future efforts to renew Medicare extenders, which end in 2017, or the reauthorization of funding for the Children’s Health Insurance Program.

Neither candidate has articulated, nor is expected to articulate a view on the 340B Program. However, the candidates’ divergent views on the Affordable Care Act (ACA) may provide a roadmap for their potential actions. Clinton’s view that the ACA should be defended and expanded appears to align with a positive view of protecting the Program. Trump’s view that the ACA needs to be completely repealed appears to align with a negative view of protecting the Program. A repeal process would provide numerous opportunities to introduce legislation negative to the Program.

Currently, the United States Senate consists of 54 Republicans, 44 Democrats and 2 Independents. Twenty-four of the Republican Senators, 10 of the Democratic Senators, and none of the Independent Senators are up for election. Democrats are expected to make a significant gain in this election cycle, and are likely to regain the majority. This change would be accompanied by gaining control of the highly influential Health, Education, Labor and Pensions (HELP) Committee. Under Republican control for the last 2 years, the Committee has been attempting to take a critical look at the Program through studies conducted by the General Accountability Office and the Office of the Inspector General. See Table 1 for information on all 34 Senate races. 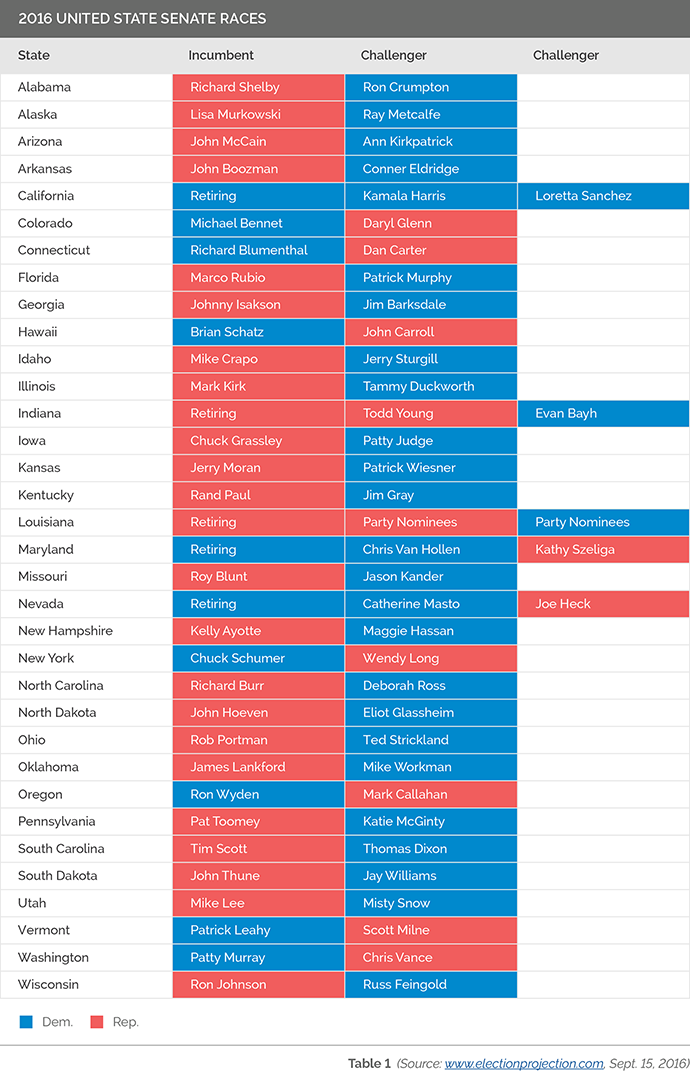 The House of Representatives consists of 435 members who are elected biennially. The current make-up of the House is 247 Republicans, 187 Democrats, 0 Independents and 2 vacancies. All seats are up for election in November. Current predictions indicate that the Democrats will pick up a significant number of seats, but have only an outside chance of gaining the majority. Control of the critically important Energy and Commerce (E&C) Committee is expected to remain in Republican hands. See Tables 2 and 3 for information on the House of Representative races. 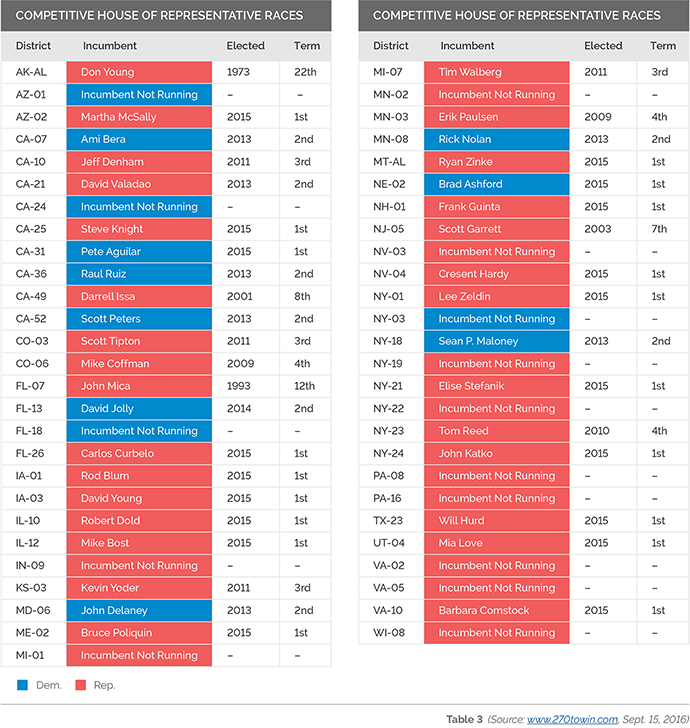 It is important to note that views of the Program do not align 100% by either political party. Many Republican members of Congress have been supportive of the Program. Evidence of this bipartisan support is best seen in the July 25, 2014 letter to the House’s E&C Committee, which was signed by 76 Congressmen, and the July 28, 2014 letter to the Senate’s HELP Committee, which was signed by 31 Senators. Senators and Congressmen interested in the Program tend to focus on whether or not “it is working.” Typically, support for the Program comes when a Senator/Congressman sees real-life examples of the Program working as planned – Covered Entities enabled to stretch scarce Federal resources as far as possible, reaching more eligible patients and providing more comprehensive services.

How can Covered Entities make sure that the Program remains intact and that changes focus on expansion and optimization, not contraction? We urge you to follow the following four simple steps: We are confident they will be highly effective.

1 . Get the facts.
Know where the candidates stand on healthcare issues, in general, and the 340B program specifically.

2. Give them the facts.
Make sure the candidates know how important your work is to their state and/or district. Support your statements with facts, including how many people you employ and how many patients you treat. Discuss how critical your Covered Entity is to their constituency.

4. Set the record straight.
Opponents to the Program have been very effective in “changing the facts.” Let the candidates know the following.

The entire Wellpartner Team is here to serve as an information source for 340B-related news and analysis, and to partner with you to advocate on behalf of the lives and communities serviced. Please call or email us, if we can assist you.

twitterfacebooklinkedinemail
Copyright ©2021 Wellpartner. All rights reserved
Back To Top
×